Happened to visit an Italian cuisine restaurant, I didn’t understand a word, so I settled asking for some dish that had mashed potatoes. When the dish arrived I was totally excited, because it had a variety of yummy baked vegetables, noodles, cheese and just a scoop of mashed potatoes. I wondered, why the dish is suffixed “with mashed potatoes” instead of bell peppers, or zucchini, or paprika, etc..

Likewise, in life, even when you have nothing to do with something, without your knowledge you get tagged along. Even when you are simple, and have no clue about anything happening around, stones are pelted. In the recent times, I resonate a lot with these mashed potatoes. I was not involved in something, I had nothing to do about it, end of the day the saucy, racy, minced and hot conversations pepped but without contributing to the conversation, I became the “mashed potatoes”

World is full of complicated people, and manipulators who try their best to complicate others life and manipulate things that were not in one’s mind. This also reminds me the recent movie released, where the protagonist would just call a friend and ask him to be careful regarding a murder in his town and the whole story would take a turn when the friend manipulates and blames the protagonist for the murder.

I don’t understand why people don’t live and ensure they never let the other live in peace.

However, what they talk about me defines them better, isn’t it? When I walked in with my friend to a shopping mall for his birthday shopping, we saw many a shirts. A few had floral designs that we laughed upon, a few had pockets that made us screw our face, a few shirts’ colours threw us aback. When I picked a shirt, he asked “seriously?” and vice versa. But, End of the day, the brand is a brand. Even if you laugh at a few designs sometimes, the brand will always be the same and you’re a slave who spends the hard earned money to buy a shirt. The brand also defines you when you walk out wearing the shirt, isn’t it?

Umpteen can backbite, kid you, look down and raise their brows, but your standards will never change. In fact, those around must be matured enough to understand their level. Just pretty glad that it was an opportunity to understand them, as always, karma is a bitch and life by itself would teach them a lesson.

Adios, let’s avoid toxic people who poison our days with unnecessary thoughts. Few don’t just stop painting their nails and lips, but their lives as well.

I crossed this book in the recent Hindu Lit for Life event where the author was featured along with a few who write Erotica. The author of the book Ananth Padmanabhan is also the CEO of HarperCollin and that the book is published by Penguin.

First Impression – The title was not catchy, and having the read the book, I also feel that the title is not the apt one for this book. The cover is classy, but again it says nothing much about the book. The blurb definitely caught my attention. The last line of the blurb says that the protagonist falls in love with another woman which was intriguing enough.

Has the author made justice to the above definition – Yes! But…

What did I love about the book? 1) I liked the language – sophisticated 2) Editing – near perfect. The editor has done a great job, kudos!

Frown factors: 1) Going back to the definition by goodreads – “Erotica is any story that places sex at the center of the story” – Where is the story? Nowhere in the 245 pages is a story that one could say. The novel is a sheer sex manual and nothing else.

2) Protagonist Sid is a sizeist – he won’t do chubby and fat. He is so lucky that all five girls around him are hour glass lookalikes. So what he does? Sleep with four out of five. Why not the fifth? because the other colleague is sleeping with her.

4) the most frowned upon factor is that the novel has huge potential to explore about what makes one love the other woman as written in the blurb. That was left unexplored, like totally. The novel has 2 different affair pepping up and the reasons are that first affair is because the guy is unhappy in her wedding and he second is because the woman can’t conceive – like seriously? If these are any reasons at all? The transition and battle in one’s mind when falling in love with another while being in a relationship is left as such.

5) Though Sid is found guilty and thinks whether he is cheating, he tends to use every opportunity to sleep with the next woman he hits on.

6) Too many loose ends – Roy’s life is left unattended, For the sake of it there were details about Sid’s company

7) Sid finds himself falling in love with a married woman because she took care when he was admitted in the hospital. This is the only difference at all used by the author to say he “makes love” with this woman but “had sex” with Cara, the other protagonist. I don’t understand whether Indian’s are not ready to take flings or something, the author wanted to play it safe stating that Cara is half-turkish.

9) Cliche’d moments where sex happens in Goa, NY – why? Why these places are predominantly used just for sex scenes?

Of all the frown factors the unexplored potential of the novel which could talk more about how one falls for another when being in a relationship with one makes the reader crib. Also, the difference between making love and having sex is not defined. The story moreover says sleep with any if you feel like, even-if-you-are-married. It’s still ok if the transition is explained, but none.

I definitely appreciate the attempt with Erotica, but falling short of a story cannot be accepted.

I received a hard copy of the novel from the author in exchange of an honest review.

Kudos to the author for picking this genre, not many restrict their audience as such.

First Impression – A well-researched and magnified work on what a woman goes through, there are moments in the book that makes the reader gasp and swallow the gumball logging, kudos to the author. The book turns instantly close to the reader, and what Maya goes through pricks. 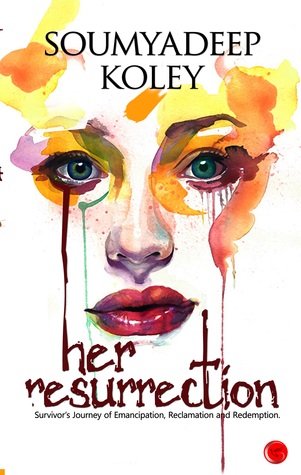 Overall Impression – Inspiring read. The grey patch of a woman and the view from her end is well written. There are pretty good characters etched by the author, that makes one feel good here and there, though the novel takes one’s breath away. I appreciate the author for the not-so-happy-ending which is indeed the fact, but the bravery and confidence sprinkled and to see Maya’s character bold was a treat as a reader.

What did I love about the book? 1) Emotions captured 2) Storyline 3) strong dialogues draws a lopsided smile

Frown factors: 1) Could have been a bit crispier 2) Proof reading errors 3

I was naked, so was he and so was she. It never made a difference, we were used to it. Those who walk past us always looked down at us like a piece of shit, literally and thoughtfully which again didn’t make a big difference. We don’t give a damn about those who judge us. There was one guy who stopped by with a backpack; he looked decent with costly shirt and trousers. He settled at a safer distance and took something outside, the other guy next to me identified it as a camera that he had seen already elsewhere. I saw the man fidgeting it for a long time, looked through it and pointed on us. I was terrified; I turned my back towards him and continued playing. There were a few crossing us; a few used a kerchief to cover their nostrils whereas a few used their thumb and forefinger. Again, it didn’t make a big difference to us, we were used to it.

I wanted to ensure that the guy left, so I turned back and was thrown aback when I saw him just inches away from me. He crouched and gave me something which looked like those chocolate wrappers I have seen around in this place. But I was only destined to smell and lick the wrappers so far, and this being my first time to touch, unwrap and taste it, I smiled. No, I grinned.

“What?” I asked, chewing the chocolate wafers for the first time.

“Just keep playing, don’t bother to look at me,” he said.

He was around us for another 20 minutes, while a few more crossed with their saree’s Pallu or Salwar’s dupatta over their face to avoid inhaling the stink. Whenever I look at any of them, they avert eye contact, I wonder why. I find this place nice because I get to try something new, I can be myself with her and sometimes, I have got a good meal as well.

The kind man walked towards me again to give another chocolate wafer wrapped in a deep blue cover with zig-zag corners. This time, he gave one to all three of us, so the whole bar was for me and I didn’t have to share. I was amused!

In a few days, I saw our picture, all three of us. It was beautiful, blown rectangular and in a size I have never imagined. We three looked at each other to ensure it was us. I saw her smiling! I have made her laugh heartily but this was the first time that she smiled.

There were words written, in a language that I didn’t know. In fact, that’s when I realized I can’t read or write any language for that matter. I have never been to school, so was he and so was she.

My friend went near a warm old man who thought we were trying to ask for money and moved away. “We are the three in that board there, what’s written next to our photo?” he blurted. He stopped moving and turned to read those words. “It says about pollution and how kids get affected,” he said and walked a few steps away, indicating that he is not ready for any more questions. I walked back to my dirty puddle and threw the chocolate wafers there, which she picked up and looked at me with a smile.